Under the reading lamp 2 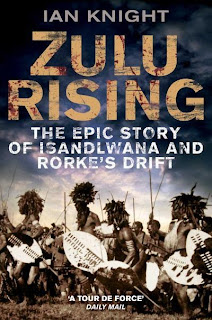 Through the last days I have been reading this book from Ian Knight. It is a quite heavy book in many ways. First more than 700 pages and also very detailed with some very nice black and white pics. If you are looking for a book about uniforms then forget it. This is an in death analysis of the various things happening before during and after the battle of Isandlwana. It starts with King Shaka and his rising to power through his encounters with the different white people and the one that came after him till Cetswayo. But it not only shines a light on the Zulu but also on the other ethnic groups living in South Africa. I do not only mean black people but also the various whites. Boers, Traders, Hunters and also the representatives of the British Crown. Why all this was inevitable and the roles all these people play in African history.
It also gives a very detaled account of the ways of recruitment the different formations and ways of deployment in battle not only of the British but also the Zulu. You read about why the trusty Red Line fails to stop the horde of Zulu Warriors and dramatic details hat did eally happened through accounts of witnesses.
For the wargamer in us you will find the biggest list of Zulu names for the different Officers and Regiments hints about detailing the games and pushing rules maybe in a different direction. For those with a shortage of space you read about parts of the battle and get hints about recreating on your tabletop. Some what if's like what if Lord Chelmsford have known the deployment of the Zulu some time before and not only when the did arrive so short to the camp?? Could Anthony Durnford men make a change if the had more time and space for their fall back manouver?? Or did he just needed more men?? And last but not least could one or more battalions with Colonel Pulleine make a drastic difference??
Highly recommended book also for those not overmuch interested in colonial warfare.